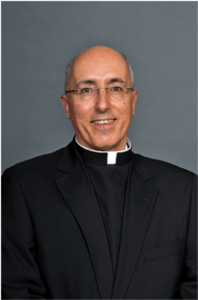 Born in Barcelona, Spain, Fr. Jose Maria spent the first part of his life enjoying this beautiful city in the Mediterranean. There he studied and worked as an architect for several years.

A pilgrimage to the tomb of the apostle St. James in Compostela, Spain, brought him to a deep encounter with our Lord, which led him to get much more involved in the Catholic Church, becoming a member of the Neocatechumenal Catholic Movement. After a while, walking in a parochial community of this movement, he started feeling God’s call to the priesthood, which was confirmed in another pilgrimage to Holy Land on the occasion of Pope John Paul II visiting Israel.

Fr. Jose Maria felt the call to become a missionary priest and was sent to the Archdiocesan Missionary Seminary Redemptoris Mater in Denver, where he finished his studies in Philosophy and Theology. He was ordained on May 14th, 2010, by Archbishop Chaput. He has developed his missionary ministry in different places, all in the United States. Prior to coming to St. Clare, he served as the Pastor of St. Mary Catholic parish in Rifle for 5 years. Since 2017 he has been assigned as the new pastor of the parishes of the Valley (Minturn, Vail, Edwards, Beaver Creek and Eagle). He enjoys being part of the faith formation of the children at the school.